Come to Middlesbrough for some clean air!

Middlesbrough is set to cast off its smoggy reputation with the installation of a lung cleaning experience at its railway station. 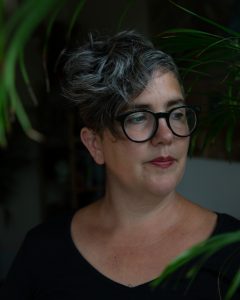 It forms part of a series of pieces with a clean air focus that is being curated by the Festival of Thrift for its second Viewpoints project, which sees sculptures, installations and artworks displayed across the Tees Valley from 12 -19 September to prompt discussions about sustainability issues.

Transpire/Respire/Inspire will be a glowing cube filled with plants and light providing a fresh air portal that is actively cleaning the air and removing the toxins that are released from the modern built environment.

Dawn Felicia Knox explained that her work will “stand as a striking visual assertion in an urban landscape or built environment – the brilliant green box appearing almost otherworldly from a distance but when the viewer enters, they are comforted with the familiar, earthly wonder of plants growing.

“It will create a moment to stop and observe the environment, observe our breath and reconnect with the natural world, purifying lung and mind.”

She added: “We consider air we breathe in the environment by monitoring and mitigating the air released from machines, factories and cars.

“There are great strides being made to improve the outside air quality in the Tees Valley and beyond but unfortunately, the interior environments in which we live and work are less recorded and observed. We often work in buildings sealed from the outside that leaves us with air that is saturated in invisible toxins.

“Plants naturally filter the air and remove toxins as researched by Dr Wolverton in the NASA clean air studies.

“As part of my work I am researching the site in Middlesbrough and identifying potential toxins there. The structure will then be filled with specific plants chosen to remove the compounds leaving clean, fresh air.”

The artwork consists of a minimal steel structure, painted a brilliant white, which is wrapped in a near translucent material to allow light and the gaze to pass through, but protect the interior environment from the elements. 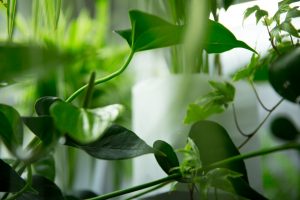 The plants are suspended by white strings and wrapped in white pots, pressing against the sides of the structure creating a dense and rich tapestry of colour and form.

Dawn will commission artist Lindsay Duncanson to create a sound piece to be played inside the structure that will invite and instruct breath. It will be created with families and young people during a series of workshops in Redcar.

Mike Drewery, TransPennine Express Station Manager said: “We are very pleased to be hosting this innovative artwork by Dawn Felicia Knox at Middlesbrough station as part of Viewpoints by Festival of Thrift. We hope that the lung cleaning station will make people think carefully about making green travel choices and using the railway to travel wherever they can.” 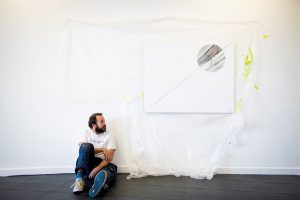 This is the second of the Viewpoints’ artworks to be unveiled following the announcement of a giant drawing that will be created by artist Peter J Evans using ink recycled from exhaust fumes at Palace Arts Gallery in Redcar throughout the duration of the project.

They include a series of enormous painted canaries created by Colin Davies using a dazzle camouflage technique, an extraordinary green house by Cabinet of Curiosity, whose striking paper-based artworks have been exhibited nationally and internationally, a free-standing observation platform by Sally Hogarth whose stunning structures and artworks have been featured at high profile international exhibitions and festivals in London and Human Sensors by Kasia Molga consisting of wearable costumes that respond to air pollution levels.

The artworks will appear from 12 September, in the run up to the festival weekend, which is celebrating its seventh year in 2019 as the UK’s celebration of sustainability.

Festival of Thrift director, Stella Hall, said that this year’s Viewpoints project highlights a highly topical issue that affects millions of people in their everyday lives.

“Art is an invaluable way to help people to understand serious issues, as tapping into people’s emotional responses is far more powerful than simply presenting bald facts. The works we have selected for Viewpoints are effective ways to explain and help people to experience and explore the clean air crisis that we simply can’t afford to ignore.”

Viewpoints by Festival of Thrift has been created with support from Tees Valley Combined Authority.

“The artworks created under the festival’s clean air theme will challenge the way people have traditionally seen Tees Valley, as heavy with industry, while highlighting this important issue. Hopefully this art and the festival itself will encourage people both in and out of the area to visit our towns and see more of what the region has to offer.” 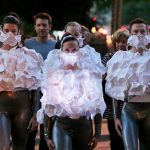 Calling all food-lovers! Get your tickets for a truly one-off culinary time-travel adventureNews