kick off this year’s event 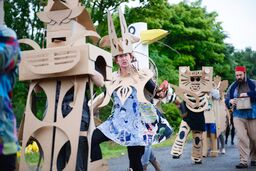 With this year’s Festival of Thrift only days away, the organisers are inviting people to join in the event’s first ever launch parade to get the big Festival weekend started.

The launch parade, which will be the culmination of months of community workshops, projects and activity in the run up to the Festival, will take the Festival right to the heart of Redcar town centre on the evening of Friday 21 September.

Revellers will be entertained by a procession that starts with cyclists leaving Kirkleatham village, to be joined from the Community Heart by walkers at 6.30pm, all then heading to the seafront and ending at the bandstand for a musical finale. The event will be a warm up to the Festival’s big weekend celebration of sustainable living at Kirkleatham on 22 and 23 September.

Produced by Stellar Projects, the parade will include lively music from Mr. Wilson’s Second Liners and Festival regulars Boom Bike, an outdoor dance performance on bikes by Bicycle Ballet, plus a return visit by Russian company Cardboardia, whose quirky cardboard creations were a hugely popular feature with festival-goers at the 2017 event.

Taking the theme of ‘Be Thrifty, Be Happy’ the parade is set to provide a fun and entertaining spectacle that will enhance the feel-good atmosphere of Thrift.

Stella Hall, Festival of Thrift Director, said: “Our launch parade aims to start things off in style this year and give people a flavour of the wide range of participants we have been involved with this year and the thrifty fun that is to come over the weekend.

“It’s fantastic to be able to get people into the Festival spirit ahead of the event. We are looking forward to a wonderful welcome from the people of mighty Redcar on Friday night.”

As the countdown to the weekend intensifies, the Festival of Thrift organisers have also unveiled a downloadable programme for the weekend, which details the ten zones across the Kirkleatham site that are set to be jam-packed with lots of things to see, do and get involved in.

To download a copy of the Festival of Thrift programme and site map visit: www.festivalofthrift.co.uk

Festival of Thrift’s first-ever launch parade to kick off this year’s event2018-09-162018-09-16https://www.festivalofthrift.co.uk/wp-content/uploads/2020/06/upcycled-logo2.pngFestival of Thrifthttps://www.festivalofthrift.co.uk/wp-content/uploads/2018/09/fot-cardboardia-work-shop-13_preview.jpeg200px200px
Contact