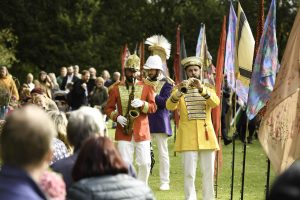 Thousands of people have attended this year’s Festival of Thrift.

Festival-goers turned out in their droves for the 2018 event in spite of bad weather warnings and chillier temperatures for an action-packed weekend at the UK’s celebration of sustainability at Kirkleatham, near Redcar.

Over 45,000 people attended the Festival weekend and the extended programme for 2018, which included Viewpoints by Festival of Thrift, the filming and premiere of Atonement Redux and the first-event launch parade which took the Festival into Redcar town centre, maintaining the popularity of the preceding year’s event.

The Festival itself, which stretched across ten zones and featured a huge variety of live performances, entertainment and activities, offered up an entertaining focus on ways of upcycling, recycling and an array of stylish ways to save the planet.

One of the Festival’s themes this year was sustainable transport and the programme included performances inside a giant wheel, Wheelhouse by Acrojou, a musical adventure with Bicycle Boy where the audience pedalled to keep the show going, and a lively outdoor performance celebrating women, cycling and fashion from Bicycle Ballet.

A new cycle hub was also established in a partnership with Sustrans where visitors could have their bikes fixed, get them marked, create pedal-powered artworks and have a say about transport planning.

Visitors enjoyed a range of performances including the screening of the Festival of Thrift- commissioned Atonement Redux, a thrifty reshoot of the famous single-take Atonement scene shot on Redcar beach, the Festival’s roaming Phoenix Voices choir marking the centenary of women getting the vote in song, a kitsch re-creation of classic pop videos by a human jukebox and lots of live music on the SABIC stage including young musicians from Redcar’s Tuned In venue alongside more established bands.

Many headed home with new skills and knowledge after attending workshops including traditional Swedish handicrafts, blacksmithing and outdoor cooking and baking as well as Redcar and Cleveland and Stockton Riverside College taster sessions.

Innovative ideas from Business, Fashion, Engineering and Social Sciences were on show from Teesside University and support to make, mend and upcycle was available in a host of drop-in activities.

Throughout the weekend, over 190 stalls across the site offered a wide variety of hand-crafted, upcycled goods from independent businesses.

A huge choice of food was on offer including the Festival’s own unique event, The Town is the Menu meal and its Whole Hog project promoting sustainable high-welfare farming. Visitors were encouraged to bring their own bottles and re-fill them at the Northumbrian Water re-fill stations.

Festival of Thrift Director, Stella Hall, said: “It’s been another amazing year for the Festival. To see so many people having fun and enjoying the artists we have programmed and to get such a positive reaction from visitors about the importance of sustainability in every day life, which underpins everything the Festival does, is wonderful.

“Our extended programme, enabled through Tees Valley Combined Authority, has allowed us to spread a year-round message about eco-friendly living. We are delighted to have maintained our huge popularity and visitor numbers, especially given the gloomy predictions for the weekend weather.

“As ever we are hugely grateful to our wonderful partners led by Redcar and Cleveland Borough Council and Arts Council England, whose support enables us to deliver the Festival and bring such a lot of enjoyment to so many people, whilst spreading the word about how to live a creative and fulfilling life in ways that protect our planet.”

To keep in touch with news about next year’s Festival of Thrift register at www.festivalofthrift.co.uk

The National Festival of Thrift announces dates for September 2019News